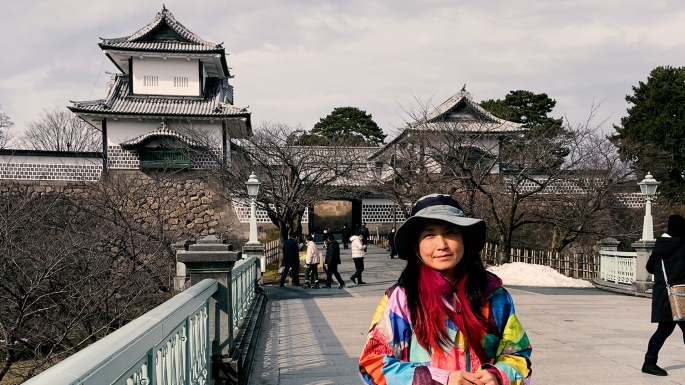 “I couldn’t speak, but I could play.”
“演奏はできる。だけど話せない、だからなんだ、いいんだ、演奏できるから、と開き直った。”

Meet the Sun, our new single arriving 25 January, is about life-long adventures and challenges.

Noz’s entire adult life has been an adventure.  For the first time ever, she recounts that story for you, and you’ll understand our song, Meet the Sun.

N.b. Noz wrote the following in Japanese, and I’ve helped her with an English version of that text (I don’t read Japanese but we have wonderous internet translation services). The photography in this post is all by Noz, on location in Japan (Tokyo/Kanazawa/Kyoto).

Japanese scenery streams past in the blink of an eye, as I write this from the Shinkansen (a high-speed train).  I’ve come back to Japan after such a long time.  Like the scene flashing past the train window, these last three days have sped by, and I’ve seen friends I’ve missed for so long.  My brother, his family, and old friends from my time in high school and language school. Sightseeing and shopping round out the experience (shopping in Japan is very important when you live abroad; you can’t get such well-priced reading glasses and cosmetics in Australia).

Coming back, I had an important realisation.  I am Japanese, I speak Japanese, but I must admit, deep down, I am now Australian.  I’ve only been back in Japan a few days and I’m already missing Brisbane.  When, and how did this happen?  There are so many people in Tokyo.  Is everyone working until they drop?  Are they happy?  Brisbane is somehow. . . different. . . it suits me.

I hesitated for a year, or maybe even longer, before deciding to go to Australia.  Back in the early 2000s I was a student in the Faculty of Education at Kanazawa University.  I wanted to be a teacher because I liked the idea of bossing students around. After completing my education degree, I could have chosen to take a teacher registration exam. But by that time, I had decided in my heart to follow a different path.  In my core, I knew I needed to play.  I had to build my world accordingly.  It was at this time, in Kanazawa, that I met my amazing percussion mentor, Tom O’Kelly. Tom is a well-known percussionist, he was a principal timpanist in Orchestra Ensemble Kanazawa for many years, played as a soloist with many orchestras, and these days owns the biggest percussion shop in Brisbane.  Tom helped me to make my mind up:  In 2003 I would travel to Brisbane, Australia, to study percussion at the Queensland Conservatorium.

It was not easy.  My compulsory English education from Japan turned out to be the most meagre preparation for life in an English-speaking country.  I felt like I couldn’t speak or understand it at all.  This crushed me.  My pride was completely shattered.  Few people knew how I felt.  I managed to conquer this ordeal by practicing.  Day after day, I practiced until the Conservatorium closed at midnight.  Performing, and learning about performing, with an intensive practice regime was my essence.  I learned the joy of it.  The love of performance kept me strong.  My English improved slower than it might have, as every waking moment was dedicated to playing.

Not everyone thought my decision to travel to Australia was sensible, and I got the impression they believed I’d be safer in Japan.  They didn’t understand this urge, and having an adventure was a risky choice.  On the other hand, I had some encouragement from trusting people who seemed to understand that risk may be rewarded, and living in a new country offers unique experiences that not everyone anticipates.  I am forever grateful for those people who encouraged me, because moving to Australia was the best thing I could have done.  In English, I am freed from honorifics, and everyone speaks with equality. It’s as if a big wall is removed.  But more importantly, it made me a resourceful person.  I developed my mind, I became wiser, and I started to live my own way.  In Australia at the age of 23 it was like I was beginning again, as a baby.  That makes me a nineteen-year-old in 2023!

During my first years in Australia I often felt uneasy and frequently considered returning to Japan.  What changed is that I made friends, and these were deep connections.  In time, I got married and began a family.  Brisbane is my place now.

A friend from high school died last night.  On arriving in Japan I had tried to contact her; she usually responds so quickly, but this time she was silent, and I immediately became worried.  She was suffering from advanced, terminal cancer. But I felt extremely lucky I was able to say goodbye at the wake even though my stay in Kanazawa was so short.

She was in the brass band in high school and was that person who never stopped smiling.  During my undergrad, I was tutoring percussion at the school (and remained there until I moved to Australia). She was back at the school, registered, teaching ancient Japanese language. Her eyes still smiled and sparkled, and her gift of smiling was now woven into her teaching.  Later, with the advanced cancer she could no longer fill this most treasured role, as her body became gradually weaker.  She wanted to live.  That battle is over now.  She was so full of smiles. She wouldn’t be happy to see everyone cry, so I’ll keep smiling for her. But it’s always hard to face death.

What would my life have been like, had I decided to stay in Japan?  I recall now how clueless I was in Brisbane.  I sat in the English classes at a language school, barely understanding a single word.  My rudimentary skills acquired in Japan meant that I was plunked into the middle range when I really wanted to be placed at the beginner level.  That’s how it was for me, starting off in this new place.  The IELTS test is an English test you need to do to enter university in Australia.  I failed it over and over again, until I finally scraped through and entered graduate studies.  I’ve lost track of how many times I needed to renew my Visa!

Throughout my academic career, I fostered a dream of playing in a professional orchestra.  If you work hard enough, dreams have a way of coming true, and eventually I found myself with a pro orchestral gig.  At first I thought, “this is it”, but life has a way of presenting new challenges at every step.  Sure, to start with I had a lot of work, and this certainly helped financially, but the reality is, sessional work for a musician is sporadic.  Sometimes, it dried up altogether.

And even when I was gigging there were problems.  I was told I must play in a very particular fashion, and when I didn’t the leader of our section would stare me down with a horrible look.  The atmosphere in the orchestra made me distrustful. In time, I found myself looking for another job outside of music or wanting to return to my parents back in Japan.  I had dedicated my life to this, and now found myself needing to get out.  Needless to say, this was a difficult time for me mentally.  Writing this now, in Japan, I recall that there was a time, in Australia, when I lived in despair.  Even with a good husband (Nick) and beautiful children, and despite years of dedication as a musician, I blamed myself for everything; for being useless.  And, somehow, I kept going.  I put the orchestra behind me; it turns out that I’m a strong person, and I’ve been able to forge a productive musical journey as an independent musician.

It must have been during that dark period that I met Tom (the other part of Shugorei).  The funny thing is that we crossed paths decades before we were friends, as I was playing his compositions long before we had spoken much.  Much later, on another occasion when I played his music, we came to chat and finally became friends [Tom interjecting: it’s almost impossible to meet Noz and not want to be friends with her].  By and by, Shugorei came to be.  When I tell my Japanese friends that Shugorei is the name of the music group, they always say, “what?  Guardian Spirit?  The spirit that protects you?” [Tom interjecting:  there’s a curious aspect of the translation here, because in English, both the sound of the word Shugorei, as well as the concept of it, feels cool, whereas in Japanese I’ve come to understand there’s a kind of spooky characteristic to it, which Noz was initially worried might put people off, but she seems to have come to like it, in spite of curious reactions].  I like the name now, very much, because it occurs to me that what we have is, in a way, sacred.  We made our own magic, just by using that word.  The word itself brought the Guardian Spirit to us.  I’ll always be grateful for that.

Processing…
Success! You're on the list.
Whoops! There was an error and we couldn't process your subscription. Please reload the page and try again.

In the second half of 2022, we’re working toward some big things. As of early September 2022, we’ve already played for Jungle Love Festival and Brisbane Festival. In October this year, we’re due to play at Port Fairy Spring Music Festival in Victoria. And in the closing months of 2022, we’re going to bring you all-new recordings from an all-new album.

Unlike last time, we’re going to introduce this next album in stages. This will involve periodically releasing its music, so you’ll be able to enjoy it even during the process of its development. Our first single from this album is called Carrying The Fire (yes, this is a reference to The Road, by Cormac Mccarthy!).

Our new album, like the last one, is ripe with symbolism and reverence for nature, grounded in lore, emanating mystique and a catalyst for imagined dances and imagined worlds. It’s darker in parts, it’s changed in parts, and it’s considerably longer. As well as our core duo (Tom and Nozomi) it involves collaborations with singers and instrumentalists, including an entire string quartet. More on this soon (we can’t wait to introduce you to our collaborators). We really hope you are looking forward to it.

If you’re lucky enough to be in Port Fairy for the festival (see link above), you will get to hear some of this all-new material before anyone else on earth. We will be playing there, on stage with Black Square Quartet as part of a 90 minute feast for the ears.

Regardless of your travels during October, stay tuned. We’ve got so much music to get to you!

Imagery: These photos were taking during Brisbane Festival’s Art Boat Cruise, and the installation visible in these shots is called The Spheres by internationally renowned visual artist Lindy Lee.